They want our campaign outlawed!

Australia’s coal industry is pushing the Government to make our fossil fuel divestment campaign and other boycotts illegal. We need your help to push back.

Just days after launching its “Australians for Coal” campaign*, The Minerals Council of Australia is “considering whether to join the push by resource industries to ban environmental boycott campaigns as it battles an escalating grassroots movement calling for banks, superannuation funds and institutions to ditch fossil fuel investments.”**

The Minerals council says it wants to stop the “small number of noisy extremists creating the false impression that the community does not support Australia’s second-largest export sector”.

Can you chip in $10 or more to help us grow our divestment campaign in Australia?

True, we are noisy but we are not small in number. And the real extremists are the fossil fuel companies that are willing to profit from the wreckage of our country and climate. We think it’s pretty reasonable to try to maintain a planet somewhat like the one we were born into.

We need to show Australia’s fossil fuel industry and our Government, that we’re not backing down from this campaign. Instead, we’re turning up the heat. Chip in today to help us do just that. 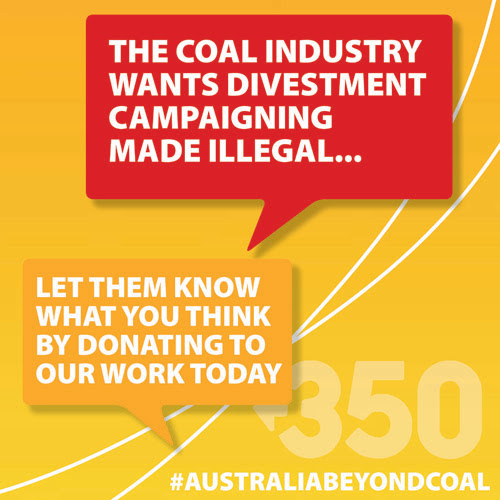 Clearly our campaign is already having an impact. But with your support, we can:

Let’s fight back this attack by the radical fossil fuel industry and move Australia beyond fossil fuels to a bright and sustainable future. Here’s two steps you can take today:

1. Chip in to super-charge our campaigning.

With so much gratitude,

* Click here to see the “Australians for Coal” campaign

*** A stranded asset is one that has become obsolete or non-performing, and must be recorded as a loss. Many financial experts believe that assets such as coal, oil and gas are likely to become stranded due to the global commitment to keep climate change at or below a 2°C which will require a rapid move away from polluting energy.