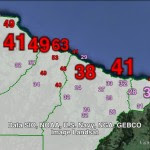 Braddon covers the north-western corner of Tasmania, as well as the west coast and King Island. Most of the population lies in the Burnie, Devonport and Ulverstone areas.

In 2010, the Greens won a seat in Braddon, giving them a seat in every electorate in Tasmania.

The Liberal Party is in a strong position to win a third seat at the expense of the Greens in Braddon.